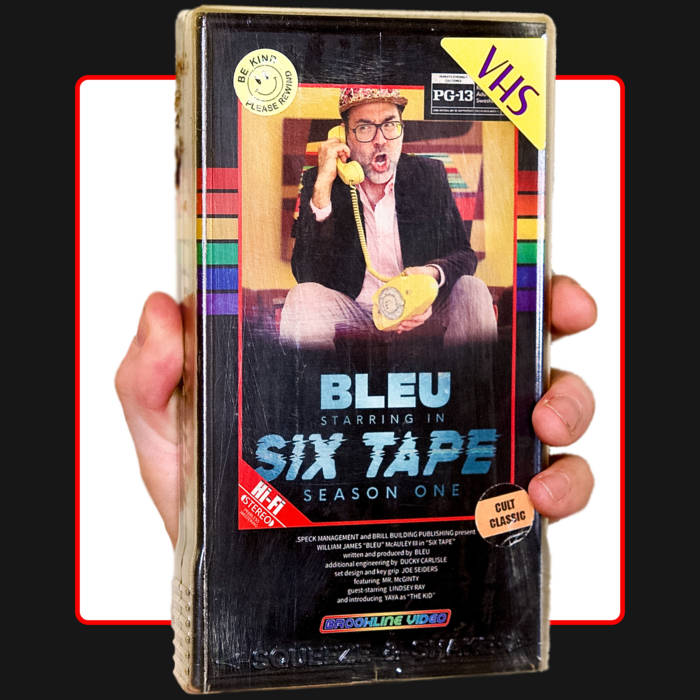 rrholyoke Keep going back to this one; catchy as hell! Where's the video? 🎶😁 Favorite track: Kid Someday.

ctkurtis A pop genius singing about being a genius pop! Been on the Bleu train since redhead came out. Always blown away, never disappointed. Favorite track: Kid Someday.

Andy Levine #SiXTape is f*ckin' FABULOUS!!! Only listened once and its already ranking up there with Redhead and Four. EVERYTHING you could want from a Bleu album...EVERYTHING...smart, clever (and funny!) lyrics, all the jingle jangle of pop and all the lush orchestrations we've grown accustomed to. It says it all when his B-sides/throwaways/Bonus tracks would make a top selling LP for anyone else on their own....just FANTASTIC Favorite track: Snakes.

…Featuring his popular single “Love You So,” SiX TAPE finds the “Boston in LA” artist opening up about fatherhood, religion, and “growing up,” while building a passionately curated collage of mostly upbeat pop sounds. With songs inspired by ELO, Prince, Dire Straits, and Carl Carlton, SiX TAPE unabashedly plays like a well-worn 90’s cassette mixtape.

“I’m over ‘figuring out who I am’” says Bleu. “I like a mish-mosh of music, just like most people do, and when I’m writing songs for myself, I’m only focused on what will put a sh*t eating grin on my face and not really worrying about the rest.”

Another self-produced album, SiX TAPE features collaborations with Lindsey Ray – Nashville based indie ingénue and sync queen, on the album’s must-listen duet “Chasin’,” plus co-writers Taylor Locke (Rooney/Sparks/Train) on “Never Believe It” and Isaac Bolivar aka Izzy Fontaine (Seal/Banks) on “My Emo GF.” Mr. McGinty (Jesse McGinty), one of LA’s most sought-after session players (Pharrell, Lizzo), makes multiple appearances as a co-writer and instrumentalist on some of the album’s most upbeat tracks “Baby By Your Side,” “Love You So,” & “A Crazy Life!”

“If my memory serves, ‘Never Believe It’ was written on a day when the intention was to get a song that I would sing/produce/release,” says Taylor Locke. “But I'm really glad it turned into a Bleu song instead! We spent most of the session developing the Dire Straits-esque track. We knew we were going to have a long, dramatic intro, lots of big tom fills, and then drop down to a riff that would be evocative of Mark Knopfler. For the chorus, we went more ELO. I don't think Bleu and I have ever worked on something together in which we DIDN'T talk about Jeff Lynne a whole lot! Having said that, I'd like to point out that the "science vs religion" content is something Jeff Lynne would never touch. I think it's a satisfying thing that Bleu often does, where you're seemingly inside a well-worn genre, but the subject matter and lyrical tone are totally contemporary and individualistic.”

As for the art of “not chasing” in life, or one’s musical career, Lindsey Ray has this to say about the album’s only duet, “For me, “Chasin’” is about recognizing what a waste of time it is chasing ANYTHING in life, because truthfully the chase itself is an attempt at controlling something that can’t actually be controlled, and when we try to control things that are out of our control, it will always result in some sort of suffering. I was at a place in my life where this was finally becoming very clear to me and I was making a choice to be done with that way of living.”

SiX TAPE, mostly written well before 2020 and originally meant to be an album of collaborations, has taken its time to come together, and morphed into something new and more personal than it was originally meant to be. Fatherhood put the kai-bosh on the constant collabs, and from this new stage of life comes the intimate immediacy of “Kid Someday,” which encapsulates all the excitement of someone who just found out they’re about to have their first child. No less personal though is the record’s energetic highlight track “A Crazy Life!” written and recorded with Mr. McGinty entirely remotely during the pandemic. Bleu describes in detail the high and low-lights of living “a crazy life” and following your fam on that journey even if it’s “psycho.”

The kaleidoscopic soundscapes presented on this collection perfectly reflect Bleu’s musical journey, which includes past albums of power-pop (Redhead, on Columbia Records), pure homage (the Jeff Lynne obsessed collective L.E.O.), and electro indie-pop on his last self-release “To Hell With You.” Bleu is infamous for delivering multi-genre collections, but on this album, it’s worn as a badge of honor. Whether it’s daring or not, he’d rather entertain you with variety than stay in one lane that would inevitably feel forced by song SiX.

...although Love You So and I Wanna Write You A Symphony have been released previously as singles, these album specific versions have been lovingly remixed and remastered.

**Bonus Songs: will not appear on iTunes/Apple/Spotify/Amazon etc., they are exclusive to the Bandcamp version of SiX TAPE