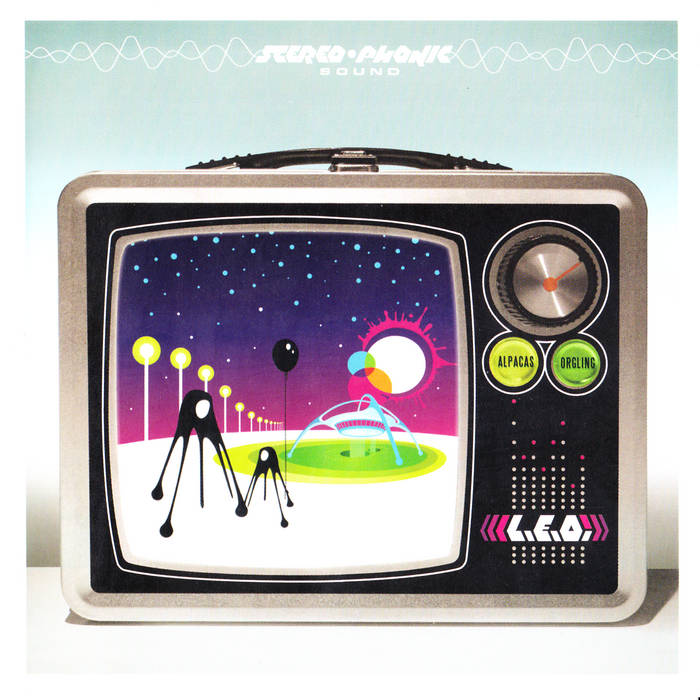 Alpacas Orgling is an ingeniously arranged evocation of the orchestral pop-rock of the mid-seventies, a sound built for the eclectic AM-radio pop charts of the time, but also cool enough to resonate for years on the FM dial. It’s a style epitomized by the sweeping productions of the Electric Light Orchestra, which created a technologically enhanced wall of sound as grand and wonderful as Phil Spector’s “teenage symphonies” of the mid-sixties. This is no mere homage to an earlier era, however, simply compiling familiar songs from back in the day. Rather, all of these lush, vocal-stacked and hook-packed tunes are originals, composed by a collective of pop-obsessed, genre-jumping contemporary musicians.

Among the collaborators assembled here as L.E.O. are vocalist Andy
Sturmer, from nineties power pop-icon Jellyfish; singer-guitarist Mike Voila, formerly of the Candy Butchers and co-writer of the Oscar-nominated movie theme “That Thing You Do!”; multi-platinum producer John Fields; Papas Fritas founder/producer Tony Goddess; Matt Mahaffey of the acclaimed one-man-band Self; Jason Scheff, vocalist and bassist for the legendary band Chicago; singer-songwriter Paula Kelly; Black Crowes drummer Steve Gorman; and even the Hanson brothers. This wildly eclectic crew was brought together by Boston pop auteur Bleu (William James McAuley III), who whimsically decided to embark on this unique project four years ago and managed to cajole his many far-flung pals to join him for the ride.

Mainstream audiences may recognize Bleu from “Somebody Else”, his rock radio-worthy contribution to the Spider-man soundtrack or “I Won’t Go Hollywood”, from Win A Date With Tad Hamilton. Savvy, left-field pop fans will know him from his own just-under-the-radar album, Redhead, which, according to Pop Matters, “recalls passionate days gone by of crunchy harmony-guitar leads and wonderful sing-along melodies and infectious choruses.” He’s also toured with the likes of John Mayer, Five For Fighting, and Japanese duo Puffy AmiYumi. Alpacas Orgling, Bleu explains, had its genesis in an exchange with his songwriter friend Dan Wilson, late of the band Semi-Sonic. Wilson was recounting stories that producer Rick Rubin had told him about the unusual methods Electric Light Orchestra mastermind Jeff Lynne employed to make records, both for himself and his bands and for such artists as The Beatles, George Harrison, Roy Orbison, Tom Petty and the studio super-group, The Traveling Wilburys.

Bleu was intrigued. Alpacas Orgling, he explains, “started out as an excuse to try out some of these ideas Dan had told me about. Lynne has a very idiosyncratic way of recording. Looking back, I have no idea if these stories were true, but it all seemed to make a lot of sense to me at the time. I thought, I’ve got to try these things out to see if they work. So the project started out very slowly as a goof, getting together with different friends to see if we could write a Jeff Lynne-inspired song. Sometimes I would try specifically to emulate something he had done or pick it apart and put it back together. As it went along, the project morphed into more of an excuse to record with this incredibly talented group of like-minded musicians.”

One could say that L.E.O. is a 21st century, alt-pop version of the Traveling Wilburys, filtering the spirit of ELO and like-minded groups through a modern, and more than a little subversive, sensibility. The performers use the same sort of distance-bridging technology as the Postal Service did on its groundbreaking Give Up; in fact, the L.E.O.-ers were lucky enough to have even more programs and bandwidth at their disposal. Many parts of this album were recorded remotely by the individual musicians and bounced back and forth via computer. As Bleu explains, “that was another big idea behind the project: almost everybody involved is a producer and has a home studio set-up and loves other producers. I basically executive-produced the album; everyone else produced their own parts. That was one of my goals, to get all these producers and let them do their thing and see what happens.”

Sturmer signed on, he explains, because “as an impressionable young music fan, ELO’s presence simply could not be avoided. Jeff Lynne’s genius for hooks and melody left so many pop gems ringing in my ears that when it came time for me to start developing my own musical language, Mr. Lynne’s influence was inevitably present. In a parade of boring tribute albums, this CD is unique. Instead of filling it up with cover songs --which always fall far short of the originals --this project endeavors to honor the musical language of ELO, using its vocabulary to create entirely new conversations. The fact that so many vast new landscapes can be created within that framework is a testament, not just to the talents of the diverse artists involved here, but also to the vibrancy of the language created by Jeff Lynne and ELO.”

The dialogue that Bleu created over the internet with his musical cohorts bolstered friendships that had originally been established face to face. For example, the New York City-based Mike Viola, who co-wrote “Distracted” and “Make Me,” had only known Bleu by reputation when he invited Bleu to sit in on a show during a residency at Boston’s Paradise Lounge. As Mike recalls, “I was having local artists from Boston join me, people I had never met but had heard of, or with whom I shared mutual friends or fans. There was no official running order, with one band setting up while the other was breaking down. All the equipment got set up at once and each artist would play a few songs and hopefully it would evolve into a stream of consciousness where we performed what people in the room were really responding to as opposed to using a set list....Bleu got into the whole idea, the whole camaraderie of the musicians sharing their inspiration. One of the first songs we played together was ELO’s ‘Telephone Line’.... It sounded so amazing, I think we did it two times in a row because we were sure we would never get a chance to play it again. Shortly thereafter he told me about the L.E.O. project and he kept coming down to my shows and sitting in. He started sending me files and I did my stuff from New York. He’d send a song that needed a bridge, I’d give him one, he’d listen and edit, then send it back to me again.”

As L.E.O.’s ringleader, Bleu had his hand in all aspects of the project. He wrote or co-authored all but one of these tracks himself and took on most lead vocal chores; he also played everything from guitars to keyboards to drums. Boston native John Fields -- whose impressively eclectic production credits include such artists as Andrew W.K., Pink, Switchfoot, Semi-Sonic and the recent comeback disc from Soul Asylum -- had both performed on and produced Bleu’s Redhead. He was attracted to Bleu’s “intense charisma, his zest for life,” and, John adds, “he really works hard. He’s a finisher, not just a starter.” Swapping tracks with Bleu via iChat, he contributed guitar and bass to five of these tracks. Says Fields, “I didn’t have to give Bleu a whole mix, I could send him solos, electric guitar tracks, and he could have them within 30 seconds to ten minutes – and I’d just lay them down at home.” Drummer Tony Goddess -- a one-time member of the indie-pop Papas Fritas, which started out at Tufts University in Boston -- wrote the music and collaborated on the lyrics for “Private Line.” He first met Bleu when Bleu visited the studio where Goddess’ current Boston-based band - the Cheap Trick-meets-Prince, pop-dance outfit, the Rudds - was working. Said Goddess, “he came down to a session and we hit it off pretty well. This guy has the goods – Redhead was an awesome album. People should be shouting from the roof tops about his talent.”

Every name on the album credits for Alpacas Orgling makes for great
googling. The interconnections among these players suggest there’s a thriving, parallel pop universe in which artists like Bleu make music that’s both serious-minded and light-hearted, reclaiming familiar sounds from pop’s past to ensure its healthy future. It’s a place just beyond the mainstream, but not that hard to find. Alpacas Orgling is all the more compelling because these relatively unsung pop heroes have managed to effortlessly recreate, in clever and cheap do-it-yourself fashion, an expensive and much-labored-over studio sound. Along the way, L.E.O. gives their work emotional depth by injecting it with romance, wit and yearning. Alpacas Orgling is pop music designed for an instant of pleasure, yet secretly built to last.